The island is a top place for some sea-bird watching, with numerous cliff edge viewing spots and hundreds of birds of various species vying for our attention.

We saw a total of ten sea-bird species all up, six of which were lifers for me. Many of the birds were into their breeding seasons including some boobies that were nesting on the rocky islets (pictured above) along the north coast.

From the lower viewing platform at Capt Cook monument , we sighted a striking Black-winged Petrel circling before flying into its nest burrow out of sight in the cliff below.


A lone female frigatebird was spotted but too distant to identify as Great or Lesser.

One of the highlights was observing the tropicbirds and their spectacular nuptial aerial displays. A group of eight of these surprisingly bulky birds were seen hovering, fluttering, gliding and even flying backwards over Cemetery Bay.


Our favourites were the ethereal White Terns, beautiful birds to observe, especially in an aerobatic display of tandem flying, twisting and turning in perfect unison above the blue waters. They have the unusual habit of laying and incubating their eggs on the bare branches of Norfolk Pines. It seems to work fine although stormy weather would have to cause some casualties. 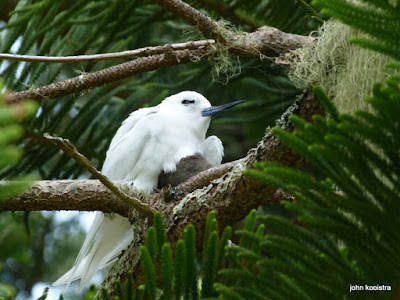 Scoped views were had of a close relative, the Grey Ternlet, roosting and possibly nesting on a rocky islet along the north coast.

Walking through the Hundred Acres forest in Rocky Point Reserve was a surreal experience as we watched a Black Noddy flitting only metres above our heads, possibly searching for a suitable nesting place in a tree. The individual in the photo below was probably searching for some nesting material. These birds were much more numerous than the very similar Common Noddies, which differ in being a ground nesting species.

Distant rafts of shearwaters were seen on the water from Puppys Point before flying in on dusk, back to their individual burrows along the open grassy banks above the cliffs. On a more sobering note, some headless carcasses of these ocean wanderers were seen besides burrows at Rocky Point Reserve. Probably the depredations of one or more of the feline inhabitants here, this phenomonen was hopefully being investigated by the appropriate authorities.

A few Pacific Golden Plovers, a northern hemisphere migrant, were loafing around the airport looking for a feed in the grassy verges along the road and runway. It's always worth looking out for the various wader species or vagrants that visit Norfolk Island, especially over summer.

For more information on this fascinating island, visit this excellent and informative nature blog by an anonymous author who is currently residing there: http://naturalnorfolk.com/wp/

Our accomodation, peaceful, spacious and central was self booked through:
http://www.channersonnorfolk.com/holiday-houses

A list of the birds we saw and identified during our stay on the island is shown at the end of this post.

Clare and I had the opportunity of spending some time on Norfolk Island last month, two hours flying time east of Brisbane, but a world away from the hustle and bustle of that metropolis. My main focus (as always) was birdwatching on this Pacific Ocean gem and we had a week to enjoy the beauty of its seascapes and natural features, as well as contemplating its rich but sometimes brutal, colonial history.

We had agreeably mild weather during our stay and the birding started from day one in the backyard of our comfortable holiday house Fe-awa (Forever) with views to match. 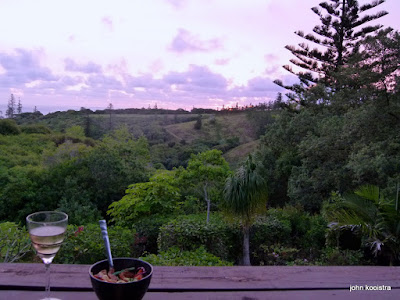 When I wasn't looking up to watch the White Terns and Sooty Terns flying overhead, the bush birds were keeping me entertained with their antics.

A wander down the road next morning after awakening to the beautiful dawn chorus, had me onto the more open country birds, including some of the many introduced species on the island.

The Botanic Gardens were well worth a look, with a good little visitor centre (un-manned) and excellent walking tracks.

We did a several walks in the National Park over successive days, an outstanding area of remnant forest and a great example of what much of the island must have resembled, pre-European settlement.

We observed the female above feeding her young charge below, and had good views of a brilliantly coloured male along another track. Alas no photo.

We did sight the endemic and endangered Slender-billed White-eye here too, with small groups working their way through the mid to high canopy.

The highlight on our second visit to the National Park was observing the elusive Norfolk Parakeet.

After first hearing the distinct call of this much sought after bird, one flew over our heads displaying it's emerald green plumage and red crown. Not long after, while walking a different track, we came across this character feeding nonchalantly on pine seeds beside the walkway. Having been on the brink of extinction a few years ago, there is now a healthy population of 250 plus, after some concerted conservation efforts. Still, they were the only two we saw during our visit. 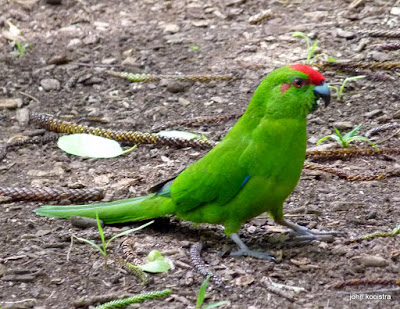 While walking the Mt Pitt to Mt Bates track we crossed paths with a pair of these introduced but charismatic quail, fairly common throughout the island but quite wary.


Posted by John Kooistra at 8:47 PM No comments:

After living at our abode at Kureelpa (see previous post) for just over a year now, we have built up a nice list of 100 species of birds seen or heard, from the property.

One of the highlights was a pair of Black-shouldered Kites that nested in the top of a tall hoop pine out front, raising two chicks to fledging stage before dispersing.


We occasionally hear their contact calls or see them hunting in the distance over the surrounding paddocks. 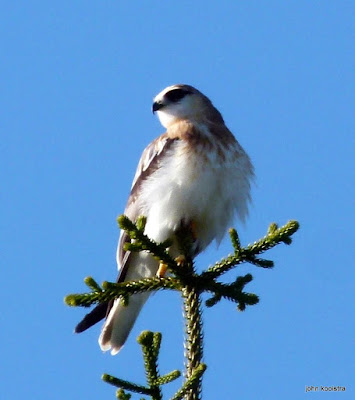 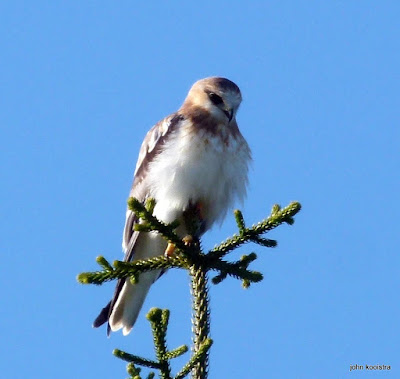 A pair of frogmouths spent a morning trying to roost un-obtrusively before, I suspect, being moved along by a Magpie-lark that had alerted me to their presence with his noisy alarm calls.

This particular pigeon is a regular, recognizable by the distinct, patchy plumage around the head and neck.


One of the seven species of cuckoo on our list, posed nicely on the back fence. We only hear it's mournful call for a short while at certain times of the year, before it moves on.

This triller, a rare visitor to the area turned up one day, searching for invertebrates among the wilting flowers of a silky oak in the backyard. A bird I've only seen on a couple of occasions in over 15 years of living on the Sunshine Coast, it was a thrill to see one at home and so close, albeit for only a short time. 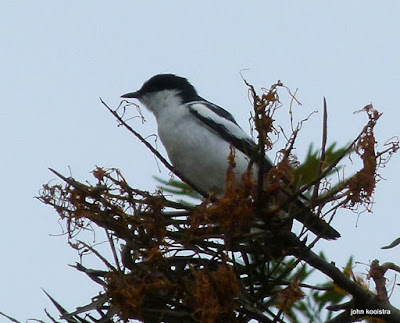 Raucous flocks of these large cockatoos fly by, sometimes landing in the flowering grevilleas for a poke around before heading off down to the coast or up to the ranges. You can fully appreciate the size and character of these wonderful birds from close range.


The Restless Flycatcher is a resident bird that usually lives up to it's name, but in this instant bucked the trend and sat still for more then five seconds.


This lorikeet, a casual visitor to the garden was searching for sustenance in the form of nectar from a grevillea flower.


As was a Dusky Honeyeater, a regular here that competes for food resources with it's more prolific cousin the Brown Honeyeater.


Another highlight was couple of  visiting Little Lorikeets. An uncommon species I have only seen a couple times up this way, that flew in with a small flock of Scalies amongst which they can easily be overlooked. 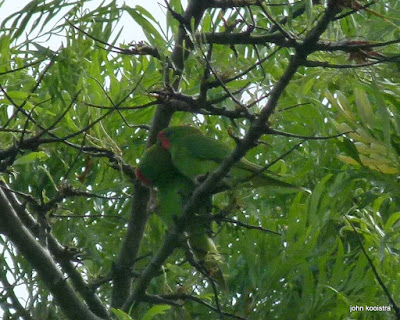 Another of our seasonal visitors are the Silvereyes, which I always delight in hearing and seeing as they pass through in busy little groups. Sometimes I am privileged to hear a solitary bird quietly mimicking other bird species, a trait not commonly known of this diminutive migrant.


A lone White-necked Heron that flys in regularly to a small dam on the neighbours property, is one of the few members of this family we see from here.

Our raptor count is quite impressive with ten species, but no decent images of any seen from here except the temporarily resident B.S.Kites. I had the pleasure of observing a Spotted Harrier flying past quite closely one day, but with no camera handy. I have included a photo of one taken this year from another location here on the coast.

John Kooistra
I have loved wild birds and birdwatching from about the age of twelve. I use a Panasonic Lumix FZ100 camera for photography and Nikon Monarch 8x42 binos for observing. 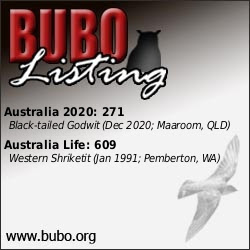 Other Wildlife and Nature Pics